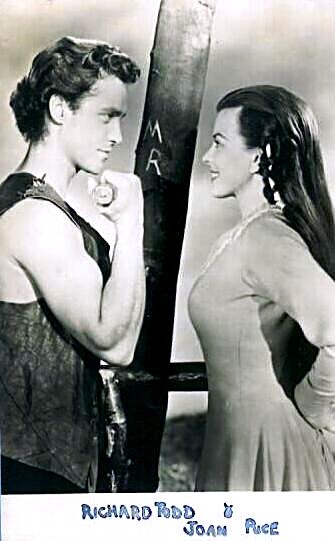 I thought I would share with you this postcard from my very own collection. This was the first piece of memorabilia I ever bought.

Thats a nice still clement, theres a similar one i think i may have sent you with a tree and a carved heart. a handsom pair huh?.

Just thinking how young Richard Todd looks in this film still. He would have been 32 at that time and Joan Rice must have only just turned 21. Within 18 months of this picture she would have completed Robin Hood, been to Hollywood and gone out and returned from Fiji to film His Majesty O Keefe. What an incredible time in her life it must have been as she rocketed to fame from humble beginnings. I for one really admire her for these acheivements.

I just had to buy this postcard.

In fact I would like to buy every bit of memorabilia I see, but unfortunately my bank balance wont allow it.

Plus my family think I'm mad!

Thats a good point Neil, about Toddy being 32, he certainly does look a lot younger.

Joan seems to have coped with being thrust into superstardom fantastically well for a former Lyons Nippy.

It would be interesting to find out what the producers of Joan's other movies thought of her ability as an actress.

Having posted earlier about Joan Rice having done so much in a short time I probably also should have mentioned that the young looking Richard Todd at 32 had by then, as we all know, been a founder member of Dundee Rep, Served as a Paratrooper and War Hero at Pegasus Bridge with our invasion force as well as all over Europe, and then come back into films and made quite a number including one with a future President of the USA. Not bad by the time you have barely reached
30 years of age. Richard Todd's life has been an incredible, and at times tragic, journey and fascinating too. Surely he deserved a Knighthood.

Most certainly Neil, arise sir Richard Todd. this should have come years ago, its such a shame that the right people who really deserve this honour are sometimes overlooked.