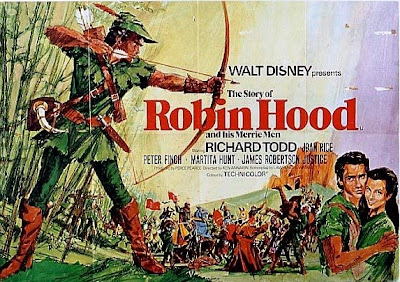 This poster advertising the 1972 release of Walt Disney’s Story of Robin Hood and his Merrie Men is the dynamic art-work of Arnaldo Putzu whose mainstay of work was found on British Cinema posters of the 60’s and 70’s.

Arnaldo worked in the chief film agency in Britain, run by one of the un-sung heroes of British cinema-the commercial artist Eric Pulford (1915-2005). In 1943 Rank invited Pulford to set up a design studio which later became known as Pulford Publicity. By 1963 it had evolved into the large London agency Downtown Advertising, which in addition to Rank and its Gaumont and Odeon Cinema chains, later held accounts for Universal, RKO, United Artists, British Lion, Columbia and Disney.

From the mid 1950’s Pulford employed a series of Italian artists and his studio eventually included 44 artists and photographers.

In about 1967 Arnaldo Putzu was brought over by Pulford as an in-house artist at Downtown Advertising and later for Feref Associates. Like the other Italians employed by Pulford, Arnaldo was very quick, normally taking about two days to paint a poster. Critics would probably vote his art work for Michael Caine’s gangster film Get Carter (1971) as one of his best.

During the 1970’s Arnaldo went on to become the regular cover-artist for the teen-age magazine Look-In; these days he is still happily painting in Rome.

Arnaldo’s 1972 poster for the re-release of Walt Disney’s Story of Robin Hood is typical of his flamboyant style. But it borrowed heavily from the original British poster of 1952, which in my opinion was far better. In his version the style is more graphic and the colours are darker; particularly the green. The image of Robin with his bow is far more menacing than the original twenty years earlier and Arnaldo has switched the positions of Robin and Marian which in the 1952 version was a straight copy from the publicity still.

I would be interested to know which you prefer.

Ther is no doubt in my mind, the 1952 poster is so much better, beautiful , charming, Analdo Putzu obviosly use 1952 poster as a guide, just changing the positon of Robin Hoods legs and re arranging the rest. in the 1952 poster the greenwood is lush and green, much easier on the eye. bais as i am with the 1952 version, the 73 version does have some merit, i would say second best, the American version is , well ,terrible i think. i wonder wether Peter Ellenshaw was the artist of the 1952 poster.

PS, The whistling arrows , what a good name.

I agree Herns son, the '52 poster has the Disney charm and magic about it.

It is a nice idea to think that Peter Ellenshaw was the artist behind the original poster, but I expect it was produced by one of the designers at Pulford Publicity.

Ellenshaw was probably busy at the time on the maté work for Disney's next project, Sword and the Rose.

Oh! and yes The Whistling Arrows certainly has a buzz about it. I will have to ask the rest of the band!

I didnt realised that the film had a re release in 1972 and am somewhat surprised at the news. I would have thought that I would have been very aware at the time but wasnt. Wonder what the supporting film was. As regards the poster I have to agree with Herns son and yourself that the original as sent in by Mike (who sent me a copy some time ago) is far and away the better.

That was the year given for the poster by the seller and it was about this time- in the early seventies-that I first saw the movie at my local cinema.

Hi Clement of the Glen , i was suprised to see you had not seen The story of Robin Hood for the first time until as resent as 1973. it shows the power of this film that it can impress you so much even 21 years after its making. Magic indeed.