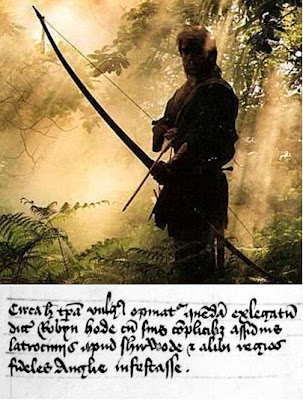 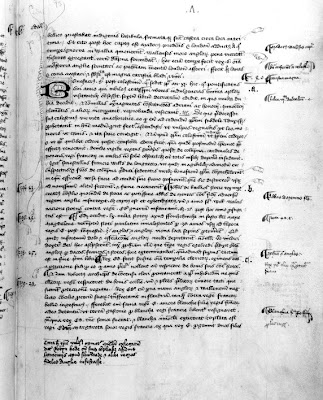 This is a very rare opportunity to report on an important discovery in the search for Robin Hood. Recently the world’s media have excitedly reported on Dr Julian M. Luxford’s significant find of a new historical reference to the famous outlaw.
Dr Luxford, a lecturer in art history at St. Andrews University in Scotland, found the Latin chronicle, known as Polychronicon, while researching 15th Century drawings in the library of England’s prestigious Eton College. The college was founded by King Henry VI in 1440. The manuscript, believed to have been written at Witham monastery in Somerset, has been at Eton since 1913 and its link to Robin Hood appears to have been overlooked.
Written neatly in the large margin of this medieval document are 23 words in Latin:
Circa h[ec] temp[or]a vulg[us] opinat[ur] que[n]da[m] exlegatu[m] dict[um] Robyn hode cu[m] suis co[m]plicib[us] assiduis latrocinijs apud shirwode & alibi regios fideles Anglie infestasse.
(Around this time, according to popular opinion, a certain outlaw named Robin Hood, with his accomplices, infested Sherwood and other law-abiding areas of England with continuous robberies.)
The anonymous scribe was writing this in about 1460 and places his insertion regarding Robin Hood during the events of 1294- 1299, in the reign of King Edward I. Dr Luxford said:

"The new find places Robin Hood in Edward I's reign, thus supporting the belief that his legend is of 13th Century origin."

Up until now the first chroniclers to mention Robin Hood in a historical context were Scottish. Andrew de Wyntoun in 1420, placed the ‘renowned’ outlaw in the early 1280’s; Walter Bower in about 1445 placed the ‘cutthroat’ Robin Hood’s’ activities to 1266 and John Major stated that Robin was outlawed between 1193 and 1194 while Richard I was on Crusade.
Luxford makes the following points:
"Rather than depicting the traditionally well-liked hero, the article suggests that Robin Hood and his merry men may not actually have been 'loved by the good'. The new find contains a uniquely negative assessment of the outlaw, and provides rare evidence for monastic attitudes towards him. The inscription's author does at least acknowledge that these men were active elsewhere in England.
By mentioning Sherwood it buttresses the hitherto rather thin evidence for a medieval connection between Robin and the Nottinghamshire forest with which he has become so closely associated."

This is of course a significant find. It gives us a glimpse of the first English chronicler’s view of Robin Hood. For someone like me, who has had a lifetime interest in the origins of this remarkable legend, it is very interesting. But if we strip away all the media hype, what are we left with?

· The insertion by the 15th century scribe into the years of 1294- 1299 is said by Luxford to ‘support’ the belief that the outlaw was active in the 13th century. But it could also be counter-argued that the choice by this medieval chronicler was purely arbitrary.

· The author of the note actually reveals very little information and simply relies on ‘popular opinion.’

I think you've summed it up pretty well. There isn't much new here really other than that it's the first inscription relating to Robin Hood found in an English chronicle.

Great to hear from you.

Once I had read through some of the press reports with their pictures of Errol Flynn splashed across the pages, and dug out what the inscription said, it soon became apparant that it was all a bit of an anti-climax.

Interesting for what it really is, but it seems Dr. Luxford has gone over the top with his analysis.