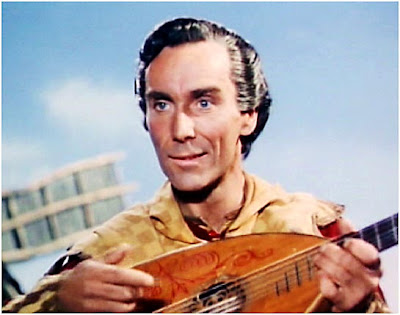 I have recently received a very interesting email regarding Elton Hayes, from Geoff Waite who has been researching the life and recording career of the folk-singer and entertainer. This is the first part of his message:

“Congratulations on your marvelous website about possibly my favorite film.

I am a big fan of Elton Hayes and his music – he was predominately a singer of old folk songs and ballads – and I have been trying to collect together his records, most of which are only on 78rpm, for some years now. The 45rpm Decca recording of Whistle my Love is a North American pressing. They were way ahead of us with vinyl whilst in the UK the song was issued on 78rpm on the Parlophone label in 1952 and (much) later it was included in a 1991 Hello Children Everywhere C.D compilation. The flipside of both the Decca and Parlophone recordings was Riddle De Diddle De Day from the Robin Hood film (‘O, I’ll sing a song a rollicky song as I roll along my way…’) This was subsequently included some years later in a vinyl EP collection of Elton’s songs called Sings to a Small Guitar also on the Parlophone label which is well worth tracking down.

You have mentioned the Beatle connection (the melody in Little Child) being inspired by Whistle my Love. Did you also know that a very young George Martin actually produced Elton Hayes singing the Edward Lear Nonsense songs The Table and the Chair/The Jumblies released October 1950 on Parlophone 78rpm and subsequently included in Elton’s EP collection For the Children. The Beatles of course signed for George Martin and Parlophone in 1962.

Some of Elton’s records are now extremely difficult to find and he has been sadly overlooked by the CD generation. Only The Owl and the Pussycat is currently available on compact disc. As for downloads, I only know of Whistle my Love and one other song. When Elton was filmed by British Pathe at the Parlophone Recording Studios for Film Fanfare, I think you will find that he was rehearsing and recording Jacqueline for the film starring John Gregson. This clip can be downloaded.

I also refer to the message you found about Elton on the Mudlark Café website from Evelyn Branston. When Elton died in September 2001 Evelyn, who personally knew him, wrote his obituary for the now defunct Mike Raven online freefolk magazine. Evelyn mentions Elton’s second film where his scenes ended up on the cutting room floor. This was The Black Knight released in 1954 which starred Alan Ladd. However, Elton can still be seen in the opening credits as the minstrel on horseback riding up to the castle as he sings the title song (released on Parlophone 78rpm as The Bold Black Knight) Elton then rides right out of the film!

According to Evelyn, Elton told her that he sang the part of the maiden in Friar Tuck’s little ditty ‘Come sing low, come sing high’ in the Robin Hood film ……“Is it in sport you pay me court with such low words as these?”"

Many thanks for getting in touch Geoff.

I will post the rest of Geoff's email soon. For more information please click on the Elton Hayes Label.

I will post the second part of Geoff’s email soon.

Interesting item about Elton Hayes who seemed to have his peak with 'The Story of Robin Hood' He toured the USA to promote the film I understand and following the release of the film worldwide he must have been very well known. Fitted the part wonderfully well and seemed a very likeable man. The detail you have received from Geoff is excellent and his comments about this being his favourite film could well be echoed by many of us

Not about Robin Hood but I have a 78 of Elton Hayes singing a wonderful song called "I Had a Hippopotamus" which was one of the joys of my childhood.