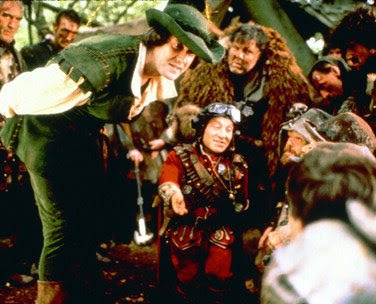 Above is a still from the movie Time Bandits (1981) showing John Cleese as Robin Hood.
On the back of the success of Life of Brian producer Terry Gilliam was joined once again, by his former Monty Python colleagues John Cleese (above) and Michael Palin. This production, sponsored again by Handmade Films, is a dazzling fantasy ride through selected historical periods in European history. Which included an array of international stars, including Sir Ralph Richardson, Sean Connery and Ian Holm.

In a brief scene set in 13th century Sherwood Forest, we see John Cleese as an eccentric upper-class Robin Hood, known to his outlaw band as 'the boss.' He runs his outlaw camp like a twisted Victorian charity organisation, where individuals are given handouts but simultaneously abused by his men. John Cleese recalled:
"I was sent the script, pointed at Robin Hood, and read the stage directions-to be played like the Duke of Kent-and I thought it was very funny, and said I would love to do it. I enjoyed doing Time Bandits enormously, despite the fact that Terry made me shave my beard off. I did it in the morning of the shooting, seven a.m. in the forest."