The Riddle Of Robin Hood 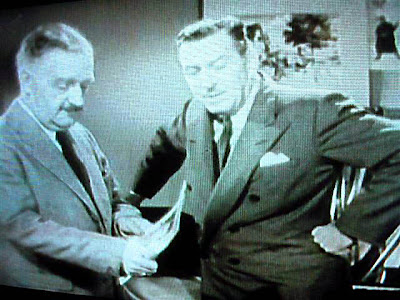 About a year ago I discovered Ken Polsson’s highly informative website ‘Chronology of the Walt Disney Company.’ It was whilst browsing through his comprehensive lists of Disney’s historical landmarks and films that I first discovered, under the year 1952, a mention of ‘The Riddle of Robin Hood.’ It simply said-under, month unknown, “Disney releases the film The Riddle of Robin Hood for promotional use [501.470].” I immediately emailed Ken, but he later confessed that he knew very little else. So I put an appeal on this website in September 2007 for anyone that might have seen this mysterious film.

In January an anonymous message appeared under my posting of Hubert Gregg, informing me that they had a copy of the film in their possession and left an email address. It was Neil Vessey, who went on to kindly describe in great detail, scenes from this very rare black and white 13 minute film. I could hardly contain my excitement and when he later went on to post eight images taken from the film, I was ‘over the Moon!’ (A picture from the Riddle of Robin Hood taken by Neil, of Walt Disney and Perce Pearce can be seen above). This is seeing cinematic history at its very best and makes working on this blog so worthwhile.

Neil described to me, how this unique footage, firstly shows Walt Disney in his studio office at Denham, talking to Perce Pearce the producer of the film and Lawrence Edward Watkin the writer of the screenplay. It also shows some ‘still shots' of their ‘fact finding’ visit to Nottingham with Richard Todd (described on this web site under ‘Film Production’) in 1951. There are clips of Richard Todd (Robin Hood) and one of the ‘merrie men,' being driven, by open car to the set. Later two more of the ‘outlaws’ arrive on bikes and possibly Martitia Hunt (Queen Eleanor) on a motorbike! They all make their way over a bridge, close to where Friar Tuck’s dog is later filmed attacking the sheriff.

Friar Tuck’s dog is also shown with its trainer, while the camera crew film Peter Finch, as the Sheriff of Nottingham, running through the river. Richard Todd in his full costume, can be seen practising the quarter staff fight with former Champion at Arms, Rupert Evans and their is even a clip of the lovely Joan Rice (Maid Marian) leaving her house in Denham and cycling to the studios. Carmen Dillon, the set designer, is also shown at Denham Studios, with models of the castle and drawbridge explaining to Walt Disney how those particular scenes would later be filmed.

In one clip, Ken Annakin, the director of the movie, is arranging the dramatic shot of King Richard’s departure for the Crusades, also Guy Green is shown being pushed along on one of the massive Technicolor cameras, filming the climatic scene in which Robin Hood (Richard Todd) leads the Sheriff (Peter Finch) at knife point towards the castle’s drawbridge. Fascinating stuff!

A very special thank you goes out to Neil Vessey.

And if any one else has information, or memories of this production or Walt Disney’s Story of Robin Hood, and its cast members, please get in touch at :
disneysrobin@googlemail.com

Perce Pearce looks to have been associated with Walt Disney since before the war and he must have had Wlat's full confidence because he produced all of the fist four Live Action films they had done and all of course made in England. He got off to a very good start with Treasure Island and continued to better that with Story of Robin Hood. The last one Rob Roy apparently did not fare so well at the box office. I noticed that Perce Pearce died in 1955 aged 55 but no more detail exists on IMDB site. Richard Todd and Ken Annakin write about him in their respective autobiogaphies though.

Neil, I will investigate the life of Perce Pearce and post an article in the future.

If anybody has any information on Perce Pearce please contact me at:
disneysrobin@googlemail.com

I just saw your post on this film and wanted to share what I wrote about it for my book "The Wonderful World of Disney Television":

Another project during this time also helped to confirm Walt's feelings about using television to promote his theatrical releases. After World War II, the Studio made several films in England to use funds being held there. Walt took Bill Walsh with him to England during the filming of The Story of Robin Hood and His Merrie Men, a 1952 release starring Richard Todd. Walsh's assignment was to produce a behind-the-scenes look at the making of the film, and he took the unusual approach of questioning Robin Hood's actual existence. The resultant 12-minute film, The Riddle of Robin Hood, was Walsh's first live action film. The Studio wasn't quite sure what to do with it, and as Walsh later retold it, they decided to give it away for free to anyone who was interested in it:

"In those days, naive was the word for the TV people. They didn't know what to do - they had to fill up a lot of time all day long, but they didn't have the stuff. We planted this film with a lot of TV stations all over the country, planted it with schools, cause it had kind of a documentary feel about it. So pretty soon we were getting a lot of mileage out of this goofy little film. Walt was sort of enchanted by that, all that free space promoting the film, so the next year the networks came in and wanted Walt to do a TV show, and he was sort of spooky about it. I think he had had a bad experience on radio using the voices like the Duck and the Mouse. Nobody could understand it and the show wasn't successful, so he was a little leery about doing a TV show."

While it wasn't originally planned as a television program, The Riddle of Robin Hood certainly served the purpose of proving once again that television and films could happily co-exist.


*** Did you know there's asecond show like this, "Songs of Robin Hood"? I have it as well if you need a copy.