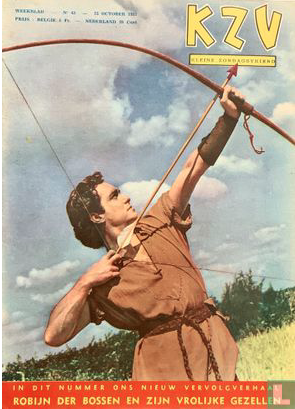 Special thanks to Matt Crandall for sending this cover of a Belgian comic of 1952. It shows a colourised still of Richard Todd as Robin Hood from the live-action movie released this year. The movie was of course Walt Disney's Story of Robin Hood and his Merrie Men.

Many black and white images, used to promote the film at this time, were colourised. By today's standards, they often look extremely gaudy. This was due to the limited printing technology at the time.

To view this web sites vast collection of promotional material from the movie, just click on the relevant label.

Many thanks to Matt Crandall for the Belgian Robin Hood Comic.