Richard the Lionheart departs on Crusade


A month ago I posted about Peter Ellenshaw (1913-2007) and his amazing matte work for Walt Disney (it can be read here). The image above is a perfect example - and captures one of my favourite scenes from the movie.

As the sun sets, Hubert Gregg (1914-2004) as Prince John, watches from the turrets of Nottingham Castle as his brother King Richard I departs with his knights for the Holy Land. The background music accompanying the scene contained a Gregorian chant that I have been unable to trace.

The day I saw this, in all its Technicolor splendour on the silver screen at my local cinema, I was enthralled. And I have loved this movie ever since.

Before computer-generated-imagery, or CGI as it is called, 'matte' paintings were used. These were created by artists using paints or pastels on large sheets of glass or integrating with the live-action footage via a double exposure. Peter Ellenshaw used this technique flawlessly on more than 30 films for Walt Disney Studios. He began working as a freelancer for Walt Disney in 1947 and became involved in the making of Treasure Island, the studios first live-action movie. It was the art director Carmen Dillon (1908-2000) that recommended Peter’s work to Walt Disney, for his next project in England, ‘The Story of Robin Hood and his Merrie Men’ in 1952.

Thanks to Laurence we now know that on Robin Hood, Peter Ellenshaw actually painted 52 matte shots. A technique that impressed the film’s producer Ken Annakin so much, that in his next picture for Disney, The Sword and The Rose, he used 64 of Ellenshaw’s fine matte work.

So began Peter’s long career with the Disney Studios and a 30 year friendship with Walt Disney himself, of whom he regarded as a 'wonderful inspiration'. Ellenshaw was officially designated a 'Disney Legend' in 1993.
1 comment: Links to this post


This report is taken from The Daily Mirror dated 17th February 1953. We have seen various pictures taken on the day of Joan Rice's wedding, but this article gives us a fascinating glimpse of  Joan's 'big day.'


A girl cried at Joan's wedding

"The wedding was over and police had to hold back the crowds that pressed around film star Joan Rice, 23, and film salesman David Green, 19, as they left Maidenhead (Berks), register office.

Cars took the guests to the reception at the home of Joan's new father-in-law, American comedian Harry Green at Maidenhead (Berks). Joan's twenty-one-year-old sister Roma was there - so were her aunt and a niece from Birmingham.

The crowds left and the road was empty. Empty except for a schoolgirl who leaned on the railings opposite the register office. Her head was bowed. She was sobbing.

Big tears came from the eyes as the girl, Gillian Rice, 14, told me; 'I'm Joan's sister. I couldn't get through the crowd."

I took Gillian to the reception; "a nice lady in the house" lent her a frock, and she joined the rest of the guests.

Joan put her arms around Gillian and Gillian's eyes filled with happy tears.

She said; "The last time I saw Joan was just before she went to the Fiji Islands last year to make a film." 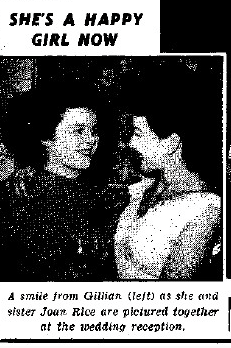 This site is dedicated to the memory of Joan Rice (1930-1997) and has over 82 pages filled with information about her life and career. Just click here to read more.