Below is a lovely picture of Joan Rice, who played Maid Marian in Disney’s Story of Robin Hood (1952). It was sent in by Neil, who says that on the back of the photo it states, 'Actress Joan Rice arrives at London Airport to fly to the Isle of Man. She is to spend a week there playing in the comedy For Better or for Worse.'
The stamp on the back has the date as the 15th August 1955. I have taken a look at her time-line and she had just finished the B movie Police Dog for Howard Huth. By now her film career was sadly on the wane and she was appearing in stage productions up and down the country. 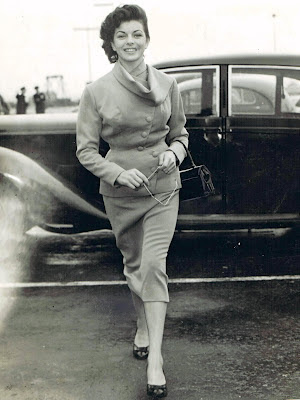 I have also recently received an email from Peter who says, “I used to deliver newspapers to the Greene/Rice house in Newlands Drive Maidenhead in the 1960s. Her husband's father Harry owned the house, I think. At that time Richard Todd used to live across the common in Pinkneys Green.”
Many thanks to Peter for getting in contact. This site is dedicated to the memory of Joan Rice and down the years we have gradually managed to piece together details about her life and career. So I am always thrilled to read about any memories my readers have of her.
If you have any information you would like to share or comments about this blog, please get in touch at disneysrobin@googlemail.com.


Special thanks to Neil and Peter

That is very interesting that Peter delivered newspapers to Joan Rice in Maidenhead. Richard Todd did live in Pinkneys Green at Wayside House certainly at the time that Story of Robin Hood was filmed. I was on holiday in that area last week and did see the house as well as go up to Burnham Beeches - almost a pilgrimage !!If as Peter says he delivered papers in the 1960s to the Greene household the marriage must have lasted longer than I thought - after all they married in 1953. Richard Todd had moved to Haileywood House by the late fifties though. Wonder what happened to David Green. I am sure that if he was still around you might have heard from him about Joan Rice.

I must try and get to Burnham again soon and have another look around. As you say it is like a pilgrimage. The Beeches is a very beautiful place and has many magical qualities.

Clement mentions the film 'Police Dog' made in 1955 which starred Joan Rice. Also appearing were John Le Mesurier and Christopher Lee in his pre Hammer days. It was a quite good B movie of the era.It is interesting to see that, as we know, Joan toured in a number of stage plays to help improve herself although eventually she must have packed this in and gone into the small property agency she ran in Maidenhead. I don't know if anyone would know how long she kept up her acting. We know she got a film appearance in 1970 for Hammer Films and this must have given her a boost.